You’ve probably heard the option stats that “most options expire worthless” and that bit of information is out there to show you how hard it is to pick directional trades in options. Why? You have to be absolutely correct in the stock’s direction…really also, in its magnitude of direction as well, so that it gets to your strike price or beyond, well before the contract expires.

You see, in buying a call or buying a put, you have ONE way to be correct. And you’re only correct in that one way IF the price gets there quickly enough (magnitude) and is well within the time allotted in the options contract (because most of the time value erosion on the contract happens in the final 60 days of the contract). This is the uphill battle that most option traders face and it’s why they have relatively little success.

Also, they have little success because they have to PAY to take on risks.

So, what if I could show you a way to GET PAID to take on risks AND win when the option DOESN’T get to your strike AND with time decay working IN your favor? Think that would increase your odds of success?

Well, what I’m going to show you is called a “credit spread” because you take in a credit (you receive money) when you enter into this strategy.

It involves two simultaneous trades. If you’re bearish and you think the stock will go down, then you place a bearish credit spread by selling a call and buying another call at a higher strike price (that essentially acts like a stop-loss of sorts, in case you’re wrong in the trade). 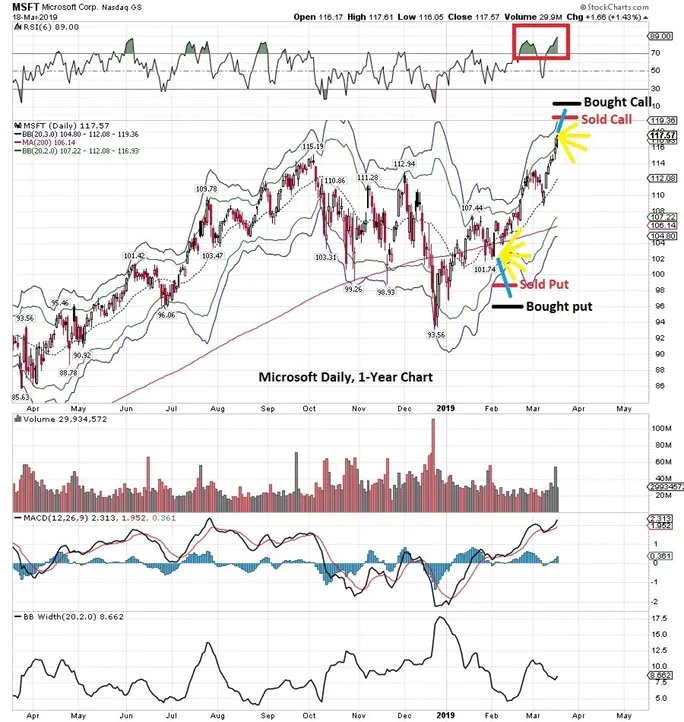 Or…if you’re bullish and you think the stock will go up, then you can sell a put underneath the stock price and buy a put at a price under the sold put’s price. (Both of these scenarios are visually marked on the chart.

The beauty of credit spreads? 1) You receive money rather than pay money to get into these. 2) You get paid if the stock DOES NOT get to your strike rather than a directional trade that only becomes profitable if it gets to your strike or beyond. And 3) Time decay works in your favor as the option contract erodes, due to the time value loss on the contract. Literally…”time is on your side” on these trades. Those are all HUGE advantages that you simply can’t find in buying just a put or buying just a call.

With buying a call or put, you HAVE TO be a great directional trader CONSISTENTLY and you have to be able to judge how long it will take to get there, CONSISTENTLY. This is very difficult for most people to do. They’re usually fighting a losing battle.

Yet with credit spreads, the stock can move away from our strike quickly, or mildly. The stock can float/drift sideways…and the stock can even move mildly towards our strike price but not expire with it still being breached…and in any of those scenarios, we make money. Also, the more time that ticks away on the contract, the more likely we are to make money too.

The ONLY way we don’t make money is when the price of the stock is still at/through/past our strike price at expiration.

So…just using a couple of indicators above (the 200-day moving average and Bollinger Bands) we can derive a ton of information to give ourselves an edge.

The moving average simply shows whether the stock is trending higher over time or is trending lower over time. And the Bollinger Bands tell us how likely the price is to remain within the bands.

So, for instance, if the trend is higher (as noted by the rising 200-day moving average and one of the bottom Bollinger Bands is hit, then we know that most likely the price is going to remain inside of the bands. And if we instituted a credit spread with a 60 day expiration date, then there’s an even bigger chance that much of that time period will be spent within these bands.

So, if I’m bullish, I can sell a put credit spread (shown above), and as long as my strike price isn’t hit at expiration, then I win and get to keep the credit I received. The only way I lose is if the price is still at or below the sold put at expiration. So, 4 out of the 5 major ways a stock can trade, I can win. And there’s only one way I can lose.

(Note: Examples of how the stock can move and be profitable are in yellow and the movement in blue is the one instance in which one would not be profitable in the trade).

Conversely, if the price has gotten extended very far away from the moving average to the upside and at or near the top bands, and I expect the price to snap back lower towards its major moving average, then I can sell a call credit spread (shown in the chart above). Again, there are 4 out of 5 ways in which I can win and only one way in which I can lose.

That’s why it’s been estimated that this strategy has a 70-90% success rate!

If you’d like to learn more about credit spreads and how I use them to generate income every 30-60 days, then I’d encourage you to get my Income with Options report (mention this report in the notes section of PayPal). You can get it for any donation of $100 to my paypal.com account: shmcc2000@hotmail.com . I’ll email you the Word doc that contains the report so that you can join around 60 other people who’ve recently ordered the report and are able to now execute these type of high probability option trades.

For all those who get the report, I’ll also include my options trading e-book, Option Trading Demystified, for free. It’s got SIX option trading strategies that I believe you’ll enjoy as well, with all of the rules to use…nothing left to the imagination.