When Most People Get It Wrong
In The Stock Market!

Today, I want to talk to you about those phases and I’m bringing this to you NOW because I believe we’re at one of the most crucial points and I want to make sure you don’t get caught in it, like the masses will.

Below, you’ll see the bull market and bear market trends in stocks and their different phases. Notice that the smartest investors are getting in at the end of the previous bear market (stealth phase) or the start of the next bull market (before its widely recognized as being in one).

Then other large institutions pile in next (in the awareness phase. They’re aware that the worst is likely over and that stocks have most likely stabilized once again). They’re buying up stocks long before they’re popular in the news and before they’re on “mom and pop’s” radars. 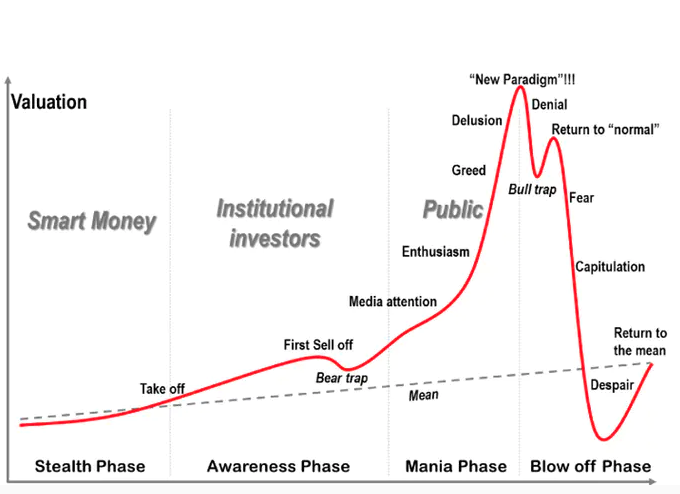 Next, you have the “mania phase” where the financial TV and internet outlets get a hold of what’s going on (CNBC, Bloomberg, Fox Business, Yahoo, etc.). The investing public typically watches this unfold for a while before they’re comfortable getting in.

Then they’ll get in when there is a “mass enthusiasm” for stocks, which tends to start about half way into the steepest part of the uptrend. Then comes the greed part of the mania phase where people trade on margin, and extend themselves more than they should because of their greed.

After that, people emotionally move into the delusion phase. This is where the “this time it’s different” phase comes in. They believe there will be a “melt up” where the Dow goes quickly from 26,000 to 40,000, for instance. This turns into their “new paradigm”.

At the end of the mania phase (which is the market’s top and when the most people are fully invested, the “blow off phase” begins. In this phase, when the first massive dip happens, they believe “it’s a buying opportunity”. After all, buying all former dips have worked, so they think this one should too. They’re in denial that the market could fall much lower or even go into a bear market (downtrend). This is the “bull trap”. They buy thinking that the market will go up to new highs just like it has over the past few years.

They quickly feel vindicated on the next bounce higher (which is generally Elliott Wave B, for those who follow Elliott Wave Theory). Yet that bounce is short-lived and the market then turns south with a vengeance and it doesn’t look back. That unleashes the fear through despair phases. The despair phase is typically when there’s a “point of maximum pessimism”, which causes a stock to typically be undervalued at that point. And its after this that the stealth phase begins once again.

WHILE IT IS TOO EARLY TO SAY FOR SURE…there is a good likelihood that we’re in the denial and possibly “bull trap” phase right now. IF that’s the case (and we’ll know for sure later), then we’re in the early stages of the next bear market.

Here’s what we do know. We know that the S&P 500 (along with the Dow, NASDAQ, Russell 2000, etc.) is overvalued fundamentally and is at fundamental levels of previous crashes. We know that the price of the index has been historically far above its 200-day moving average, which proves a euphoria among investors and massive risks that they’re taking on.

Over Friday the 2nd and Monday, the 5th of February we saw a 666 point decline on the Dow followed by a 1.175 point decline on that Monday. The S&P 500 and other indexes fell similarly, percentage wise. These investors believe that stocks are cheap and that it’s a buying opportunity. So they’re running into (what in reality are still) overvalued stocks. This will put them fully invested and cause, unfortunately, the maximum pain. Yet their greed drives them to be “all in” at this point. 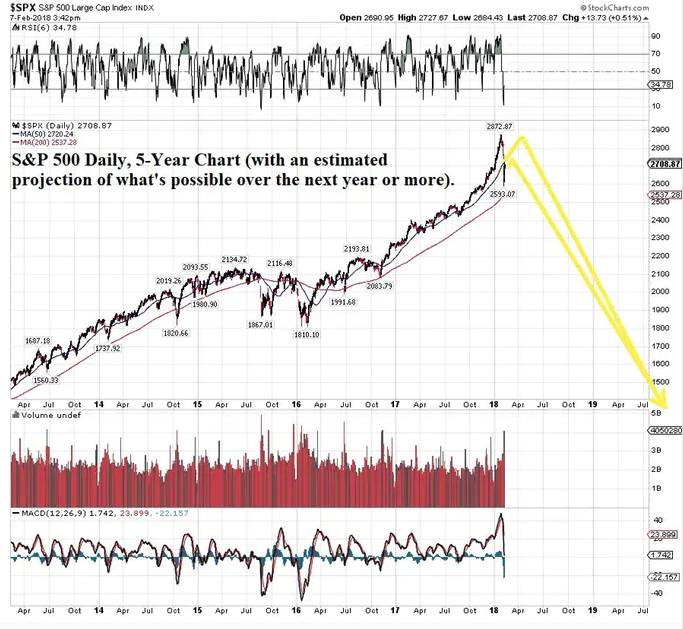 In the chart above, I’ve drawn (in yellow) what I believe could potentially unfold. Whether this plays out exactly like this or not, just know that it doesn’t negate the massive risks that investors are taking on right now that haven’t fully been felt.

You see, most investors only perceive there being risks once its felt (like housing in 2008). Yet up until that point, it didn’t “feel” risky at all…yet there were enormous risks that were soon to be fully realized.

Well, I know we’re at that point again…just like in 2008 and 2000 where investors have gotten carried away and they’re making decisions based off of emotions and without one rational thought. They’ve just passed through a point of “maximum optimism” or “maximum greed”, which is likely soon to turn violently against them.

Don’t get swept away in that. If you’re reading this and you’re not a subscriber of mine…trust me, you need a defined system to help you dodge huge downturns like the one that’s coming.

Come join my investor community at www.seanhyman.com and consider becoming a subscriber to my stock market newsletter, The Logical Investor which can be found in the Premium tab on that site. https://www.themaven.net/seanhyman/premium

Simply click on any article or video on that Premium page and scroll to the bottom and you’ll see a sign-up button. Once signed up, go to the Ask Sean section and review the videos on that page and ask any questions you might have.